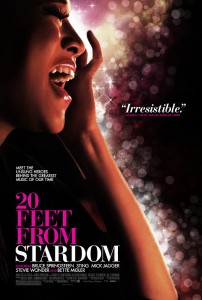 Last evening, I had the pleasure of seeing the documentary film “20 Feet From Stardom” at the SIFF (Seattle International Film Festival) cinema. It shines a spotlight on the untold true story of the backup singers behind some of the greatest musical legends of the past sixty years. In addition to telling the story of “old-timers” Merry Clayton, Darlene Love, Lisa Fischer, among others, it also shines a light on Judith Hill, a seasoned 29-year old backup singer who is pursuing a solo career. She is best known for being a contestant on the latest season of The Voice as well as Michael Jackson’s main backup singer on the This Is It tour which, of course, never came to fruition. I highly recommend this inspiring film.

I got double pleasure of seeing the film because it was the first event I attended hosted by the Northwest chapter of the Recording Academy, the people who do the Grammys. I became a voting member about a month ago and now have opportunity to go to various events. It’s a wonderful way to get to know fellow music industry people in the area and I am looking forward to participating in more future events. That and I get to vote for nominated songwriters in the next Grammy Award cycle. Awesome!!

I hope you enjoy this trailer and get a chance to see this film. You won’t regret it!