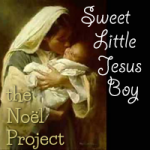 Merrilyn (my wife) suggested that we come up with something for Carina Lewis to sing on this project. I knew I wanted at least two vocal songs on this record, and I already had Carl Kelley in mind for one of them, so with Merrilyn’s suggestion, I felt Carina’s sultry jazzy style would provide a nice balance to some of the more densely-arranged material.

All I had to go on was a recording Carina did of one of her originals, and as I thought about what song she should do, an old recording from the mid-80s by the Vineyard Jazz Ensemble came to mind, a mellow-bluesy instrumental rendition of this song arranged by Scott Burnett. I knew I wanted this rendition to start the same way, with Scott’s out-of-tempo jazz guitar intro. And since Scott and Carina have worked together in the past, I knew this would be a perfect fit, so I told them to go work it out amongst themselves.

Once they were ready, we convened at her place to have me listen to it. Scott brought his guitar and amp and played the accompaniment while Carina calmly sat cross-legged on the couch. It was perfect, so perfect in fact, that I decided that I wanted to come back another day and have them do exactly the same thing, this time with my recording equipment in place. So the performance was recorded completely live, except for my piano which I added later.

← Dreaming of Snow
Jingle This →