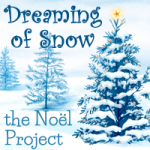 This started out as a bridge idea for Jesu, Joy, but once I realized there were already enough bridges, I decided to make this a separate song. Besides, not only was it incompatible feel-wise with the other arrangement, but since it’s actually an original piece of mine, it made sense to me to make this separate so I could take a songwriting credit.

With a more traditional jazz trio feel, we cut this live in the studio, just Bryon, Marc, and I.  We recorded it in three takes, and I had in mind all along to only include a couple minutes of it to be later reprised with a couple more minutes. This approached worked out nicely since the reprise, titled “Still Dreaming of Snow”, featured the end of a different take.

I was planning to include this in our CD release concert as sort of an “unplugged” piece in the middle, but once I discovered that the stage wasn’t big enough for a grand piano and a nine-piece band, I knew I wouldn’t be able to get the right feel with my Nord keyboard, so I left it out of the set.