The Holly and the Ivy 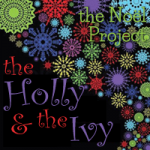 The idea of doing a latin bossa nova thing in 7/4 came early. The very first idea was the piano intro and then things fell into place from there.

I would call this my “GRP” tune on the record because it reminds me of the two jazzy holiday releases that GRP came out with in the 80s and 90s, and specifically a latin arrangement of “Santa Claus is Coming to Town” by Dave Valentin . GRP was a jazz label started by Dave Grusin which in their heyday included a roster of the top jazz artists of the day. Valentin’s arrangement inspired me to recruit my old friend Bruce Babad to go crazy on the flute for this piece.

After covering the melody on piano, then flute, the song switches to 4/4 for a piano solo reminiscent of Ramsay Lewis’ style from the 60s. Bruce takes a turn, and then I indulge in what can best be described as Retro-Exotica-Lounge. Merrilyn (my wife) calls it the Star Trek section because I use a vocal sample that sounds like the vocalist who doubles the orchestral melody on the original them song by Andre Courage. I was planning to have a nice little jam at the end, back in 7/4, which followed the chord progression of the intro, but at the original tempo. Then it occurred to me, why not switch to a fast salsa feel instead? You can’t have salsa without the characteristic piano style, and the intro I came up with proved to be quite challenging.

But why stop at just one style change? The song switches to a samba-in-7 and then a Songo, which is one of my favorite latin feels, but is particularly challenging in 7. It gave me a sense of satisfaction that when I took this into the studio, the Songo bit challenged my very seasoned drummer and bass player, studio cats that can play just about anything. But they did it, not without some playful cursing for sure.

When I decided to make a Christmas record, I decided I wanted to put on it the sorts of fun little things that I have loved about other people’s records–in this case, the false beginning, where it sounds like I’m performing in a lounge somewhere with an old rhythm machine. In fact, it was an actual sample of a Ritmo rhythm machine that I used, edited to work in 7/4. Due to the arrangement’s latin feel and it’s whimsical nature, I toyed with the idea of calling it “Holly and Ivy and a Pitcher of Margaritas”, but opted instead to use my lounge-lizard intro to make the play on words.

Publishing: Traditional/Public Domain based on The Holly and the Ivy. Original music by Kelly Carpenter, © 2013 KelSongs / Kelly Carpenter Music (ASCAP). All rights reserved.